I am a fan of candy bars, although I really can't eat them anymore, I still keep up with the varieties, and know a bit of candy bar history. Paul and I frequently stop at a supermarket on our way back to New Jersey on Sunday nights that has a British foods section in the ethnic food aisle. Anyone who has attempted to buy a Milky Way Bar in Europe knows that it is a different animal. The European Milky Way is similar to our Three Musketeers Bar. If you want something like an American Milky Way, you would have to buy a Mars Bar, which was an almond version of a Snickers, and is even called as such now. Confusing?

That said, here are a couple of examples of European candy that I think just wouldn't make it with the folks here. The chauvinistic Yorkie Bar, and Nestle's Munchies: 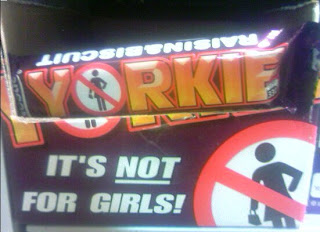 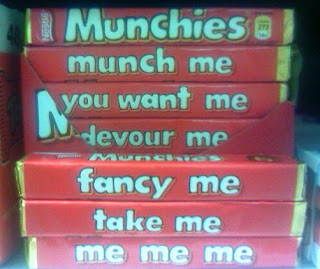