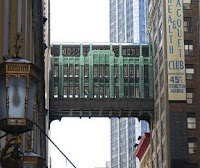 Once or twice a week, on my frequent walks around town, I end up at Jack's World. Jack's is a combination dollar store and closeout store, located on west 32nd, between 6th and 7th. Probably one of the best around. The ground floor is the dollar store and has an extensive food section. The upper two floors have anything from bedding sets, to fine chocolate, to rice cookers.

Anyone I've brought there always comments on something out in the street; A massive bridge connecting the buildings on either side of 32nd street. I finally found something about it online. It is called the Gimbel's Traverse, and it connected the old Gimbel's department store to the Gimbel's annex across 32nd street. The current owners of the building had planned to demolish it in the 80's, but have not. The up-close photo here shows the great detail and copper cladding.
Posted by Neil at 3:27 PM