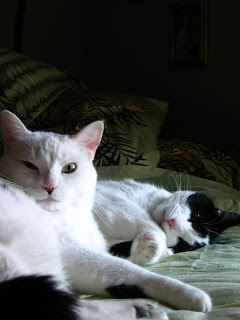 --I'll miss your strange friendship with the dog

--I'll miss your love for your sister Cleo

--I'll miss the way you would never let your mother read

--I'll miss watching you trying to "help" her work

The End Is Near 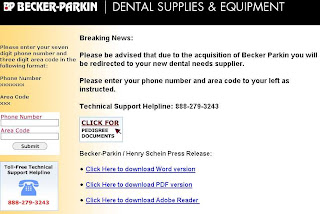 I have been reluctant to write more about the situation at work. There was too much speculation and misinformation I feel to be accurate. Now, however it seems like everything is spelled out for me. Henry Schein came in to every Becker-Parkin office on Thursday afternoon and changed the locks. They informed the employees at the location I was in that they would probably not be needed after inventory which would run until Saturday or Sunday depending on the location. They also stated that a package would be delivered to each employee with information regarding their last date of work (some were retained longer than the weekend) and severance package.

I was in our San Leandro, CA office for this. BP corporate needed a representative in each location to supervise the inventory and make sure that things were fair. It was rough seeing the three remaining people there find out that they were done. They all knew that they were going to have to leave already, but they had been told originally that they would still have a couple more weeks. I guess I should be flattered that Barry, Marty, Sergey, and the other executives feel highly enough of me to send me to do this. Part of the deal included a trip to southern California to visit the parents, which is where I am writing this from. I head home Wednesday, and will be in the office Thursday to help them with the last remaining tasks of shutting down.

I stated in an earlier post that I was doing well with my job prospects. Well, I accepted a position at AOL in Manhattan. Those that know me will laugh about this, but if you could have been with me on the interview I think you would have understood why I took the job. It seems like an amazing place to work. I feel that there is a good future in my new job, and I know I will enjoy working at 75 Rock.

I hope that all of my friends find something as good as I have. I will also constantly be on the look for jobs for those that haven't. I have more to say about the Schein-BP transaction, but I will wait until it is COMPLETELY over for that. In the mean time, please watch this space for news, and things that I find amusing. Everyone take care, and keep in touch!
Posted by Neil at 9:48 AM No comments:

I am out in California visiting the folks. Last time here I remember finishing the can of regular coffee that lurked in the dark corners of their freezer. You see, they have officially banned caffeine from the premises. So, like most caffeine addicts, I can't ignore my vice, and have to track down some brew to quiet the java monkey on my back. I purchased this can of coffee four visits ago, and stashed it in cryogenic storage, knowing that I would be back.

This time though, it was gone. The folks have sold the house, and are moving to a semi-assisted living apartment, so it didn't make sense to buy more. After arriving on Saturday night sans cell phone, I ventured out early Sunday to track down a replacement. Coffee! Where to get my coffee. I rarely drink hot coffee after June 1st, so I ran to the McDonalds near the Sprint store I had been doing business in. I discovered however, that McDonalds in California doesn't have iced coffee. Bummer! Theirs is actually pretty good. OK. Starbucks it is.

Now, I'll start this by saying that I just don't like Starbucks coffee all that much. I know all of the hype is overwhelming, but personally I just find it to taste burned. That classic char-broiled coffee flavor seems to lend itself better to a cold drink though, so I sometimes get iced coffee there. You see though, the problem is: I JUST DON'T GET IT! What is IT you ask? The whole damned Barista-speak thing.

I looked at the menu and saw "Iced Brewed Vanilla Coffee". I asked for a Venti (medium for you non-believers) Iced Vanilla Coffee. I then asked if they had something other than sugar to put in it. "We have syrups... vanilla, almond, amaretto.." "No," I said. "Something sugar free". Oh, we have a sugar free vanilla syrup." "That would be fine, and some cream too." She looked at me and said "OK sir, but the next time you order it you can call it a %$%^&^*$#%&^*&^" I say %$%^&^*$#%&^*&^ because I don't get IT. It seems to be some odd language that I just can't comprehend. I guess I'm missing some crucial gene that allows me to understand Barista-speak. It must be the same gene that tells me that their hot coffee tastes like it cooked on hibachi coals for half an hour. What ever happened to just ordering a damned coffee?

Now, I have to at least explain one more thing. Many people will read a rant like the one above and assume that I am not a connoisseur. You see, that is far from the truth. I love the coffee in the small roaster-shops like J B Peel, Monkey Joe, and Porto Rico Importing. I will go into such a place, sample a brew, and ask for a recommendation on what to buy, based on what I thought of the sample. I brew using a Melitta manual #4 drip cone, using fresh water, or with a Toddy cold water coffee system. Far from the no-name coffee brewed in the scale-encrusted auto drip like I used to.

So hear me one and all, you followers of the church of Starbian. I don't get IT, and NEVER will. No, I don't want a pamphlet explaining your beliefs.
Posted by Neil at 12:13 AM No comments: