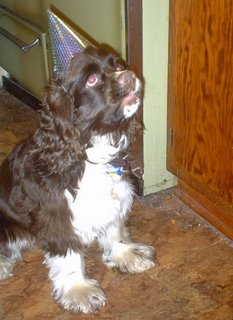 I saw something yesterday that prompted me to write this. More on that later.

Those who have known me a long time know that I was never a dog person. In the last two years however, that has changed. I am not sure of what caused me to not care for dogs. I didn't dislike them, but would steer clear of an unfamiliar one. It may have been an accident that occurred when I was very young, caused by the namesake of this blog. He came after me when I disturbed him during a meal, and pushed me into the sharp corner of a kitchen countertop. I still have a scar that is quite visible the way I have been wearing my hair these days.

Most people who "convert" will tell you that is was a particular animal that caused them to change. For me, it was Marti's dog, Obi. He's a brown and white Cocker Spaniel. Very goofy, and acts stupid when it works to his advantage, but is actually a lot brighter than that. Now that I only see him on some weekends, he goes nuts when he sees me.

Since I have become friends with Obi, I seem to notice dogs more. Here in Manhattan there are tons of them. I have even taken up going down to the Union Square dog run, just to watch the dogs. I miss my little goofball. Unfortunately, the life of an IT manager, at least currently, would be an unfair match for a canine. Maybe someday that will change. Until then, I will admire everyone else down here that has one, which leads me to what inspired this.

On my walk from 40th street to 33rd street yesterday morning, I saw a homeless man in a doorway. He was leaning up against the door, eyes closed, his little cart next to him with his belongings. A medium sized yellow lab-mix dog was sitting along side him. His head resting on his master's leg. He was watching the people pass by, as if he was keeping watch over the man. Whatever reason this man is homeless, whatever his issues and idiosyncrasies, he had taken the time to tie a bandanna around the dogs neck. The dog had a certain "look" that is hard for me to explain. I guess it was a look of devotion and love to his unfortunate master. Touching.......
Posted by Neil at 11:52 AM

I think almost every dog has the potential of being the one that sways you into being a friend to the furry beings. It is all in the amount of and quality of attention you give them when you bring them home. Obi came into my life at a time when I was feeling very distressed and lonely. I put a great deal of effort into his love and care, and I guess it shows. The other canine in our lives would most likely have been the one as well, had we known her from the beginning. Not knowing about her past, doesn't help.