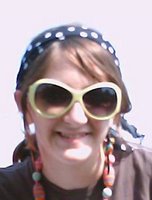 I was observing the differences in the way my children chose sunglasses this past weekend. We were walking around Chinatown Saturday, and the sun was unbearably bright for some reason. It was even worse for Amy (15) being a recent contact lens recipient. We went to a particular vendor and Amy looked over the glasses. She picked up a large yellow pair and tried them on. They looked good with her outfit. I told her I liked them. Over the next 5 minutes, she tried on a white pair, then back to the yellow, another white pair, and finally a pink pair, each time looking in the mirror and asking for our input. After the 5 minutes of pondering she chose the original yellow pair and paid the woman at the table. Now, I am not complaining. 5 minutes is actually good for Amy. We have had some pretty long periods of indecision before this that could be nominated for some sort of Guinness listing. No, it's the contrast with Alec (11) that I find funny. Alec, a few minutes later, decided he also needed sunglasses and a walking vendor happened to put a large bag of them down in front of him. He grabbed a pair from the top, pulled them out of the plastic and put them on. He looked to me for approval, I nodded once and before I cold get the words out, he paid the man and said thank you. All in all about 30 seconds. Now, would it be reversed if I sent them out to buy computer monitors?

It's that old catch-22 that we get when asked by a woman, "Does this look good on me?" If you don't believe my answer, or are going to do what you want anyway, then save me the confusion, but know that I will always answer truthfully, uh, well, as truthfully as you want me to? I will still need a fashion advisor to shop with for my own clothes and accessories though. Poor old colorblind, fashion-retarded dad! Is this green? I thought it was. What do you mean it's PINK!!??
Posted by Neil at 1:13 PM

Hallo I absolutely adore your site. You have beautiful graphics I have ever seen.
»

Your are Excellent. And so is your site! Keep up the good work. Bookmarked.
»