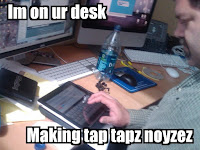 So I ended up with the department iPad for the weekend. I thought I would give some thoughts on how it worked.
First of all let's just say what everyone else has been saying: It's slick! Apple has design down with technology the way that Ferrari has it down with cars. Just looking at it in a profile view reveals that same "this thing is designed to look thinner than it really is" look that the MacBook Air has. Setup was painless, since I already had an iTunes account. It synced my music, podcasts, and pictures from the iTunes install on my Acer Hackintosh seamlessly. After syncing, startup is instant, and everything is self explanatory. Typing takes a bit to get used to, but once you do, it isn't bad (this post was typed on it). The auto capitalization and auto correct features are not as annoying as some other devices I have used.
I tried several free apps including Pandora, the ABC player, and Accuweather. All three of these took good advantage of the iPad interface and worked well. The ABC player was especially impressive, automatically switching to full-screen mode in the landscape view, and providing a smooth, and crisp video experience. Reading a book is a great experience. I can imagine that some gadget lovers have made the decision to buy this just on the incredibly cool page-turning animations alone.

As much as I really enjoyed this thing though, there are things I think I want to change before I would plunk down the cash. It definitely needs multitasking. Just as with the iPhone, it would be nice to be able to play music from Pandora while browsing the web. I think this is coming though. Some sort of USB connectivity, or card reader would be nice. I know Apple doesn't want to give us a real filesystem, but even something app-embedded would be good for grabbing pics, video, and music off of an external device of some sort. A front facing camera would work very well for conferencing. I'm still surprised that they left that out.

As much as I would like the 3G model, I really don't need more monthly service charges from a second carrier. I think I would invest in the EVO 4G phone when it comes this summer and create a wifi hot spot instead. As far as the Flash argument that this device seems to have precipitated, I agree with Apple's take on Flash. That said, it would still be nice to have Flash support for now, at least until Apple wins the war. While browsing the Sunday sale ads I found one that didn't have an HTML fallback mode and could not be read.

I can see myself buying one. Maybe 2nd generation though. Anyone else care to chime in?
Posted by Neil at 10:05 AM