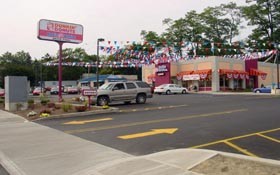 The Fox broke down. Nothing major, but it made for a lousy night because we had to abandon it in Newburgh, and then wait for someone to give us a lift to Jersey. (Thanks AGAIN Will, and Ashley!!). Just a stuck thermostat, but Lee warned me not to try to change it without having some good tools and a spare water pump housing as the bolts are known for snapping.

In the parking lot of the Autozone we had limped to was also a Dunkin Donuts / Baskin Robbins. I was frustrated and upset, but not enough to break my diet, so I was thinking "Maybe they have no-sugar-added ice cream". I went inside to look, and to get Amy a donut.

There was an 'L' shaped counter with the ice cream on the left, and the donuts straight ahead. I started to look at the ice cream tubs. There were two women working the counter. One of them said "Baskin is closed sir." This didn't strike me as strange right away. I walked to look at the donuts first, and then it hit me. Were the workers here so specialized that they were incapable of scooping ice cream? Were these...... DONUT SPECIALISTS?!?

I'll have to return sometime when the frozen dairy emulsion technicians are working.
Posted by Neil at 9:28 AM